Surprisingly, up to 85% of core usability problems can be found by observing just 5 people using your application. Conducting quick usability tests at a cafe is very effective, cheap, and doesn't require any special tools .

Why You Only Need to Test with 5 Users

Summary: Elaborate usability tests are a waste of resources. The best results come from testing no more than 5 users and running as many small tests as you can afford. 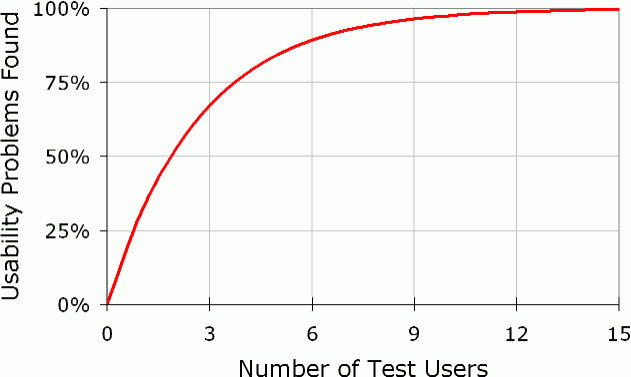 The most striking truth of the curve is that zero users give zero insights.

As soon as you collect data from a single test user, your insights shoot up and you have already learned almost a third of all there is to know about the usability of the design. The difference between zero and even a little bit of data is astounding.

As you add more and more users, you learn less and less because you will keep seeing the same things again and again. There is no real need to keep observing the same thing multiple times, and you will be very motivated to go back to the drawing board and redesign the site to eliminate the usability problems.

After the fifth user, you are wasting your time by observing the same findings repeatedly but not learning much new.

By entering and using this site, you consent to the use of only necessary cookies to enhance your site experience and improve our services.